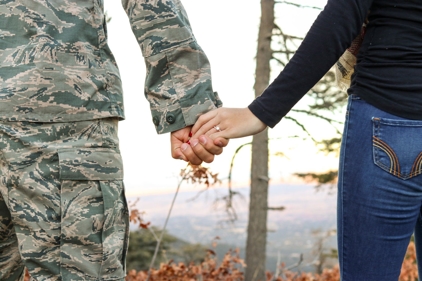 Here are some of the areas you need to be aware of where military divorces are affected by federal laws and state specific laws, rules and processes:

However, in the case of an uncontested case, the active duty spouse may not have to be served as long as he or she signs and files a waiver affidavit acknowledging the divorce action.

There are laws in place to protect active duty military members from being held in default in a Washington divorce proceeding.  These laws are there to protect an active military from being divorced without knowing it.

Under the Soldiers and Sailors Civil Relief Act, 50 UCS section 521 and in the discretion of the local Washington court, the divorce proceeding may be postponed for the entire time the active service member is on duty and potentially for up to 60 days thereafter.

However, the right to have the divorce proceedings postponed can be waived by any active duty military member should they wish to get the divorce.

Washington is a community property state and their normal divorce property division laws control in military divorces as well. This includes the division of most of the spouses’ marital assets and debts, such as the house and other properties, cars, bank accounts, investments and the like.

When looking at how to handle military retirement benefits, it is very important to be aware of the intricate laws that apply.  As an example, federal laws generally will not allow for the division and distribution of any of the military member’s retirement to the spouse unless they have been married 10 years or longer while the military member has been an active duty military member.

The amount of child and spousal support in a military divorce are determined by state law. For child support, courts usually follow Washington’s child support guidelines to determine the child support amount. Since these guidelines include how much each of the parents earn, for military families, it is important to understand the various elements of a service member’s pay.

When looking at a military spouse’s military service pay, Washington courts base that amount on his or her total entitlements (this includes base pay, Basic Allowance for Housing, Basic Allowance for Subsistence, and various special pays). It is important that the court is informed of how these separate entitlements are determined and how they may be affected by the divorce and change with the living situation of the family. The court should also understand the potential for those amounts to change based on deployments, base transfers, and other factors. There are also limits as to how much of a military member’s service pay may be garnished for child spousal support. The non-military spouse can get these payments directly from the military.  Since each branch has slightly different rules concerning this, it is very important to understand how each of their rules work and how they need to be applied for.

If the court has not yet ordered an amount for spousal or child support, service members are still required to provide adequate child support for their children.  The military services each have different rules and limitations on to how to determine the amount of child and spousal support, in lieu of a court order.

Child Custody and Parenting Time in a Military Divorce

When child custody and parenting time issues need to be determined, issues such as jurisdiction and the residence and domicile of the children and parents need to be considered.  Parenting plans also need to take into account military deployment and transfers that can make them more challenging. When determining how parenting plans can operate in the child’s  best interests and also be workable to each of the parents, the fact that a parent may be involuntarily transferred or deployed away from their children must also be considered.

It is important to understand that if one parent is an active member in the military, it does not disqualify him or her from assuming legal responsibility for a child’s care and custody, even as primary residential parent. Military bases, both in the United States and elsewhere can  accommodate families very well. School, health and other services are all available, thus a good parenting plan can and should maximize the child’s opportunities for good contact and ample time with a parent who is in active military duty.

The parenting plan can be designed to reflect the possibility that the non-civilian parent may be called to combat service, and during that time will be unable to visit the child or parent them as a primary custodian. A lawyer familiar with military divorce understands all of these interests and can work with all of these various situations involving military families who are facing divorce.

If you’re a military personnel, or are married to one, and are considering a divorce in Washington, please do not hesitate to contact our firm. We have years of experience in this realm of family law, and we are ready to provide you the best advocacy possible to ensure that your rights are protected throughout the process. Call us today at (503) 227-0200 to get started.